A board at the front door of Community Foods Market in West Oakland reads: “Share a memory with everyone regarding your most memorable family meal.”

For Brahm Ahmadi, many weekends of his childhood were filled with family meals. Growing up with a large family of Iranian immigrants on his father’s side, he wanted his store to embody the gregarious and dynamic environment of the enormous family gatherings, laughter, and food of his upbringing that solidified his appreciation for delicious meals and a sense of community.

And so he started almost twenty years ago, by driving groceries around West Oakland in a postal truck.

According to the definition from the United States Department of Agriculture, the area was a “food desert.” With no access to a grocery store, his neighbors were struggling. He realized that many of the health issues locals faced, such as diabetes and hypertension, were stemming from their diets. He saw residents realizing it themselves and feeling helpless.

“I was living here and experiencing it firsthand,” says Brahm. To get healthy groceries, he always had to leave the neighborhood.

“Growing up with an Iranian family, he wanted his store to embody the large family gatherings, laughter, and food of his upbringing.”

It was a far cry from the childhood summers he spent on his maternal grandparents’ family farm in Iowa where he, his siblings and cousins would spend months running through creeks, tending animals, watching meat slaughtered fresh, and eating fruits and vegetables picked straight from the vine.

Meanwhile, his family would return to Los Angeles during the school year and be surrounded by a different, yet equally formative environment – the gang culture and violence that was at its peak in the ’80s and ’90s. Brahm was almost immersed in it himself but for two high school teachers who pointed him towards an alternative path. His American History teacher, a Vietnam veteran, took him to his very first protest, at the Nevada nuclear test site located on traditional native lands. And his art teacher introduced him to activists at several more.

“It totally blew my mind seeing these diverse people coming together around issues of nuclear weapons and waste, and the abuse of indigenous treaties and indigenous lands,” he recalled. The exposure was enough to set him on a different course. He was seventeen, fired up, and even started an environmental club on campus. 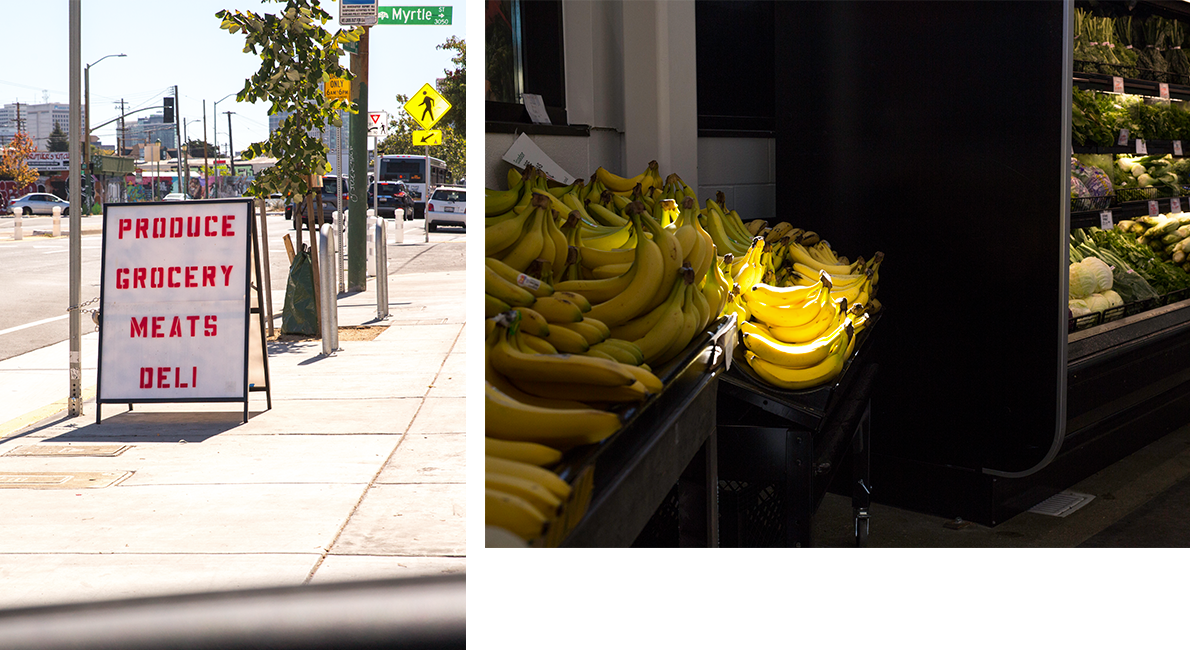 The enthusiasm followed him to West Oakland after college, where food inaccessibility was one of the primary issues. The closest grocery store was more than one mile away in Emeryville. For a community where about half of its residents have no car, he knew it was a mile too far. With two other advocates, he developed a nonprofit with food distribution, urban agriculture, education, and youth development at its core.

Brahm and his colleagues realized their small-scale variety wouldn’t cut it for the volume of need in the community. Plans were plotted to bring a grocery store to the neighborhood. Fresh produce and organic food options would be highlights of the offerings.

On June 1, 2019, Community Foods Market opened its doors, brightening the sidewalk at San Pablo Avenue and 32nd Street. It offers over 15,000 items, up from the 200 that the mobile truck held, and sees about 400 patrons a day, though He hopes to see that grow to at least 700.

Four months in, the store’s suggestion box is in full swing. Employees take customers’ requests to heart and make considerations regularly regarding what to stock based on feedback from the community. When the community asked for Amazon lockers to help prevent local package theft, Ahmadi set up a partnership to be both an Amazon locker location and a UPS location.

The next need Brahm is tackling through Community Foods Market is that for hot meals. Local high schoolers get 10% off when they stop in for lunch, and the goal is to get the café on a schedule to provide nutritious breakfasts, cooked lunches and dinners, beyond the coffees and smoothies it first offered.

For Brahm, it was always a given to ensure his friends and family stayed well fed, and with Community Foods Market, his West Oakland neighbors are the newest extension of the family.