In one of her artist bios, rapper Chhoti Maa describes herself as a “migrant in the womb.” Though I’d never heard the term before, I immediately know what it means. She was a migrant before she was even born, crossing borders while still inside her mother’s body.

Chhoti’s parents came to the US through her father’s student visa, but when her mother got pregnant, her parents realized that, as a pair of college students, they couldn’t afford the hospital bills. So they took a train back to Guanajuato, where Vreni Michelini Castillo — now Chhoti — was born.

Throughout her upbringing, Chhoti was moved between the U.S. and Mexico every few years, with each move resetting her “assimilation clock.”

This is probably why her work — whether in visual art, music, or academia — carries the impact of the Mexican diaspora in a way that feels eternally recent. It is the feeling of getting off a Greyhound bus and setting foot in a new country with the dirt from your homeland still caked to the bottom of your shoe.

There are scores of musicians who speak to the migrant experience, but few can so seamlessly combine Bay Area freshness with old world sounds.

Chhoti is not a formally trained musician. She picked up a few things while in chorus during middle school and high school. At one point she took a piano class. And when she arrived in the Bay Area, she studied West African music. She is currently a member of a calpulli, a group that integrates indigenous danza and music, where she plays the huehue, a prehispanic style drum.

Where there was fire, ashes remain They burned it all but we still have our village You can see our struggle, building despite the obstacles…

It’s not about arriving first, but of uplifting your village I carry a beautiful seed My people elevate me to where the waters heat up Fire eagle, sacred sky, open road

One of her strongest influences is from Peruvian rappers. After finishing her bachelor’s degree in Visual and Performing Arts at Virginia Commonwealth University, Chhoti felt a need to leave the U.S. She found a job through idealist.org working at a guesthouse in Peru, and booked it.

In Peru, Chhoti spent her time off hanging out in Buenos Aires, a neighborhood in the Trujillo region of Peru, and the epicenter for the country’s unique hip-hop scene. “It was the first time that I felt comfortable and I started freestyling. It was an incredible time in my life.”

Chhoti Maa’s brand of hip hop is what makes her music undeniably modern and guides the structure of many of her songs. Ancient instruments and rhythms from around the world add texture and depth.

But it is her lyrics and the way she plays with untranslatable language that really hooks me. Her music, like our conversation, is about 90% Spanish and 10% English. Her background in poetry shines as she promotes indigenous and immigrant pride while being a war cry against modern day colonialism.

If there is ever a soundtrack for the revolution, Chhoti’s music will be on heavy rotation.

Her second and most recent album, Caldo de Hueso (Bone Broth) begins explosively with “Atiza,” an anthem to indigenous resilience and knowledge. The song title itself is difficult to translate. In fact, if you enter “Atiza” into Google Translate, it offers no one equivalent word, but several explanations. It roughly means an action taken to cause a fire to burn more intensely. It can be tempting to use it interchangably to mean “stoke a fire” or “fan a fire,” except that “stoke” and “fan” are very different verbs. Atiza refers more to the goal or intention behind the action, rather than the specific method.

Untranslatable poetry like this is peppered throughout Chhoti’s work, a welcome treat to the bilingual ear. 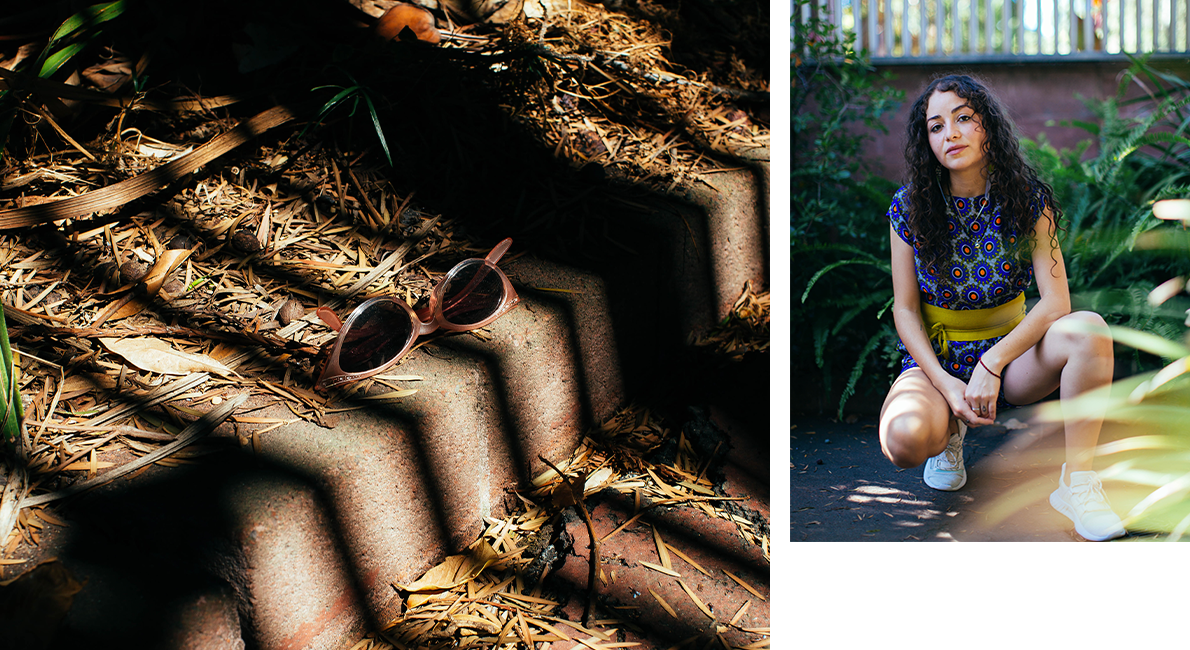 When I meet Chhoti Maa at Lake Merritt for our interview, I start by telling her an anecdote to explain the impact her music has had on me recently.

Earlier this year, I drove from San Francisco to my hometown of Tijuana to bring donations to the migrant shelters that are housing and feeding Central American asylum seekers hoping to get to the United States.

I hadn’t been back to TJ in more than a decade. I was doing this alone, with no organization backing me should something go wrong, in a town recently found to be the most violent city in the world. I’m not a humanitarian worker and I’d never done something like this before. I became petrified, what had I gotten myself into?

Despite months of planning, the day I drove from San Diego to Tijuana, I could have used a pep-talk. I found the encouragement I needed when I put on Chhoti Maa’s music. As I drove south, her words reminded me of the centuries of oppression people like us have endured for generations, reassuring me of the importance of this mission, and of my capacity, as an indigenous woman, to achieve it.

In short, it filled me with energy and boosted the sense of cultural pride I needed to get through it. When I tell Chhoti this story, not even five minutes after sitting down to talk, her tears immediately start flowing.

“Damn! Please put that in the interview, that’s important to me,” she requests.

But to those familiar with other aspects of her work, her heartfelt reaction should come as no surprise. Her music is an extension of her greater cultural work in the migrant, indigenous and POC communities.

Whether it’s her music, visual art, or the college classes she teaches, one can see that the common thread is the preservation and reclaiming of ancient indigenous knowledge, and its application in our modern lives. It’s about the importance of understanding the strength of our lineage in a world that constantly wants to keep us in our place.

Seeing how the indigenous experience and knowledge are at the center of her cultural work, it is impossible to ignore one of Chhoti’s physical traits: her fair skin.

“It’s both gonna sound ignorant and privileged,” she says about her childhood years in Mexico, “but I wasn’t aware of my whiteness.”

Most Mexicans are mestizos, an unknowable mix of European, Indigenous, and sometimes African descent. “Mi family, like many [Mexican] famillies, has people of dark skin and it has people who are even more güera than me,” she says.

“I didn’t grow up with a hierarchical ideology. I just understood that I had a big family and we have different faces, we look a lot of different ways,” says Chhoti. It wasn’t until she left Mexico that she recognized it.

“I understood that I was visibly white, I started getting questioned, ‘What are you? Where are you from?’ ‘Oh, but you don’t look it.’” At this point in our conversation, Chhoti explains the distinction between two concepts: “whiteness” and “whitehood.”

“Whiteness is visible, when I’m out on the street — I’m seen as white passing,” she explains. “Whitehood is to assume an ideology — a white where no other color fits, a white that’s like bleach, that does not allow anything else to exist, that makes everything around it seem inferior.”

Here, she remembers how her grandmother used to run a guest house from her home in Guanajuato, a touristic, colonial city. A lot of the guests were white women, students from America. “We served them, washed their clothes, made their bed, cooked for them, took them on walks,” she remembers. So despite sharing a similar skin color, “I always understood that I was not like them.”

Despite staying away from whitehood, as a white-passing WOC, she is aware of how this is perceived in many of the cultural spaces she navigates. “I’m that reminder of what happened, of that [colonial] violence.”

This awareness has led her on a path of identity exploration, tracing down the roots of ancestors who are indigenous, others from Spain and Italy. In this process, she has reclaimed the values passed on from her grandma and a long line of women before her.

“In my family, many values were rescued and cared for, maybe we didn’t say, ‘this is indigenous,’ but these values are ancestral knowledge, and no one can take that from me.

You can see me whichever way, it doesn’t matter. I know who I am and where I come from, and I know what had to be done for this knowledge to reach me.”

Towards the end of our interview, it’s clear that Chhoti Maa is just one facet of Vreni Michelini Castillo. She’s a visual artist, educator, musician, a student of herbs and natural healing, a poet, a curator and danzante, and many more things that cannot possibly fit into one article.

I tell her that I’m tempted to call her a renaissance woman, a European term used to describe a person who is well versed in many schools of knowledge. But I don’t want to use a term centered in a white supremacist view of the world.

Chhoti points out that the word ‘renaissance’ means ‘rebirth,’ renacimiento. Here, we both remember that in Spanish, a common term for giving birth is “dar a luz” another untranslatable phrase that roughly means “to give light.”

Alumbramiento is another Spanish word derived from “to shed light” that is generally used to mean birth, but more specifically describes the stage after a baby has emerged from the womb, and the body must give birth again, to the nurturing placenta. As our interview comes to an end, Chhoti tasks me with coming up with a better term to replace “renaissance woman.” So I will say that Chhoti Maa is a woman of rebirth, una mujer alumbrada.