As I sat across Hubert on the wooden bench outside of his restaurant, he looked into the clear glass window behind us. I sensed the mental checklist he was scrolling through in his head as the working uptown crowd spilled out of the door. The sweet and spicy aroma of comfort-filling BBQ and the curry for baked palata flat bread filled the air. Missy Elliot’s “The Rain” rumbled through the speakers from inside.

The founder of Burma Bear, Hubert Lim (affectionately known as “Hubie”) has kind eyes and a teddy bear-like demeanor. He opened up on 19th St. and Webster almost four years ago and has since found his space adjacent to a boarded-up building under towering cranes, a steady reminder of changing central Oakland. 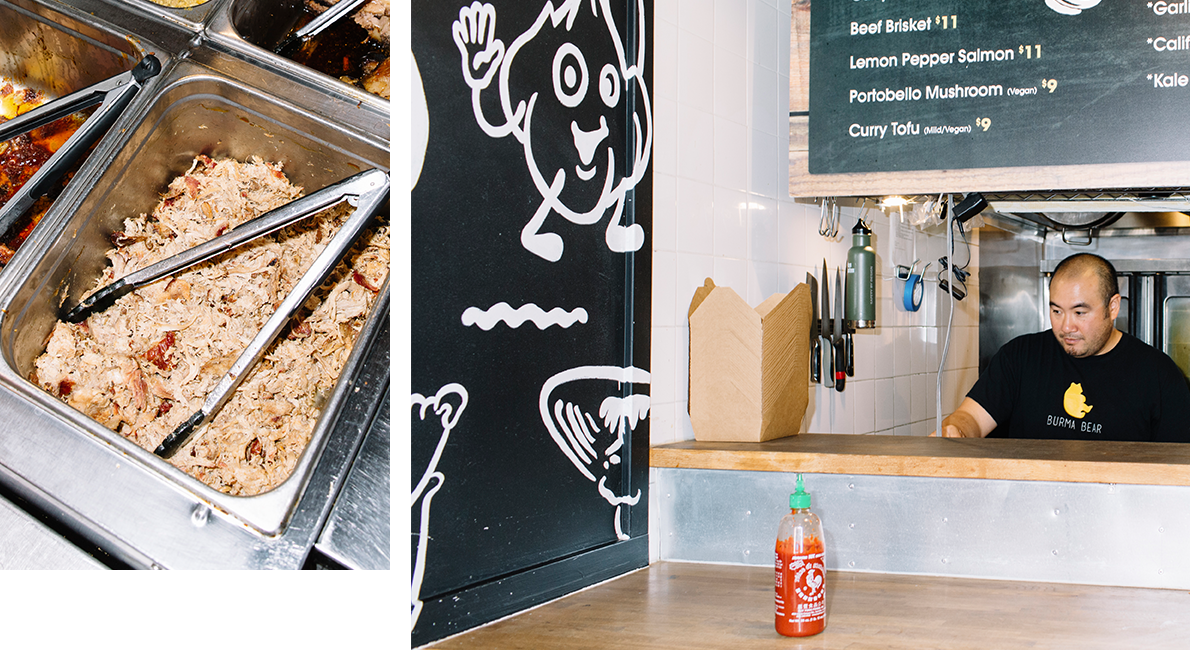 He discovered his love for cooking when he’d barbecue for friends at UC Davis. With no formal culinary training, his classic BBQ recipes and tender meats made him a celebrity chef of sorts within his inner circle.

Despite his cooking talent, he started to follow the path that his parents laid out for him in the medical field. “I went to work at my mom’s family practice after college because she needed the help at the time. I felt obligated and I thought it would be something good to do while I was trying to figure out what to do with my career,” said Hubert. “I chose to go to nursing school because it seemed to offer a well-paying and good occupation, without huge amounts of student debt.”

Even though he knew this career choice was practical, he wondered what it would be like to start a small restaurant.

So, almost eight years after he started cooking for friends, he set out to do an underground Farmer’s Market event with Forage SF. He cooked up his version of a tangy and sweet American BBQ. Hubert recalled,“People liked the meat I served, but I felt that a regular BBQ concept didn’t really stand out in the crowd. So, I thought, why not try putting a Burmese twist on things?”

He paired flavors from his childhood with his classic BBQ recipes. The ingredients were derived from his father’s home-cooked Burmese dishes, intricate tastes and strong scents that include spicy ginger, the saltiness of fish sauce, and smokey garlic —staples in his house growing up.

When his food concept started to gain loyal fans, he decided to take a risk and open up his first shop, a permanent food booth on Haight Street in San Francisco, leaving nursing on the back burner. He knew in his heart that if he didn’t open up a restaurant now, he would never do it.

Fans of his restaurant idea did not include his parents at first. When I asked how they reacted to this shift, he chuckled. “They both thought I could fall back on nursing as a career. My dad would want me to make more money. In the back of [my mom’s] mind, I’d go back to school to become a doctor or something if this didn’t work out.”

In 1982, Hubert’s parents emigrated from Burma to the US when he was still a baby.

He explained how at that time Burma was under military rule and deemed as a socialist government. “Everyone was poor. My mom and dad had completed their professional degrees and they felt there was a lot more opportunity to financially be successful versus staying there,” he said, expressing their resilience. His mother was a doctor and his father a civil engineer in Burma. “The government was corrupt in some ways and had a lot of power over people.”

How his family arrived here is similar to the stories of many other immigrant families — relatives petitioned children, parents, and siblings. Hubert’s great uncle first moved to the US in the late 1970s and from there sponsored his grandparents to come. Soon after, his grandparents sponsored Hubert and his parents. They settled in San Francisco with little knowledge of the strange, new place.

The common thread many immigrants share is their modest ambition to have a better quality of life. For Hubert’s family, it was also a chance for them to realize their full potential, oceans away from Burma’s poor and suppressive day-to-day.

Five years after his first pop-up, his fall back plans are far behind him. He’s taken reign of the opportunities he was provided and opened up possibilities for others. “I do feel a sense of accomplishment now that Burma Bear has been open for a few years. I’m most proud of the fact that I’ve been able to create jobs as a small business owner,” he said.

Burma Bear’s tagline, “Burmese and BBQ – together at last,” refers to Hubert’s ability to pair two things in a way no one else has been able to before him. The American dream and Burmese determination. Demonstrating his debt of gratitude AND honoring his personal calling. It’s the sweet taste of success.

Hubert Lim is the owner of Burma Bear, located at 325 19th Street in Uptown Oakland. They are open weekdays from 11am-2pm. burmabear.com / IG: @burmabear