“In the Arab world, the revolutions are born in the cafes, born over coffee, born in the bakeries,” says owner Reem Assil.

This sentiment is no truer than at Reem’s California. Every part of the space celebrates community and an intentional revolutionary spirit — from the open floor plan, generous seating, children’s play area, and community event board, to the numerous books available for reading, the Red Bay Coffee offerings, and the table order numbers each with their own photo and description of an Arab icon. Even this small detail provides a moment to educate customers about Reem’s culture. Number 9 is Nadine Labaki, a Lebanese actress and filmmaker. Number 12 is Naji Al Ali, a Palestinian political cartoonist.

However, what truly sets the political tone is a floor-to-ceiling mural crafted in neon green, blue, and pink of the face of Palestinian political activist Rasmea Odeh who was deported to Jordan from the United States in 2017.

The commissioned mural, painted by local artists from the Trust Your Struggle Collective, has been controversial from the start.* In the art piece, despite what Rasmea faced in her life and experienced in her struggles, she is smiling. On her left side, Rasmea wears a button with Oscar Grant’s own smiling face. This is the quality that Reem has cultivated in her bakery — a positive intersectionality of two deeply complex, cultural and political movements in one space, complementing and building upon one another.

“[Rasmea] represents so many immigrant women who have been deported. None of us know about their stories. I didn’t want her story to be lost when she got that sentence. This woman was 30 years living in this country, 20 years as a citizen. I didn’t want her story to be lost,” says Reem. “She represents a narrative that has been invisibilized. I wanted to make sure we mark it in history, the same way as Oscar Grant; we never want him to be forgotten here. For me what she represents, more personally, is the face of a strong, resilient, Arab woman.” 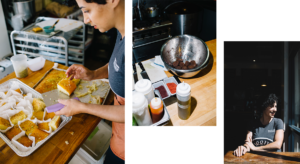 Thoughtfully spoken, Reem herself echoes this intersection that adorns her walls. “My food is Arab, my food is California. It is not a fusion of California and Arab,” says Reem, “I want it to be inclusive of all the things that I felt represented me.”

Like most entrepreneurs in the Bay Area, Reem plays many important and various roles — business owner, mother to a young child, partner to her husband, community organizer, and political educator. Prior to entrepreneurship, Reem worked in economic justice as a labor organizer in the Bay Area and chose to make Oakland her home for the last 15 years. She decided on Oakland for her brick and mortar bakery “because it was where I had done all my on-the-ground organizing. I had built community from the ground up here, in all neighborhoods,” says Reem.

When asked about defining herself as an Oaklander, she replied, “I have lived here for 15 years, but there are people who have lived here for generations…in these past 15 years, I really cultivated community here, affirming that I wanted a space that grounded me, and that gives something back to a community that gave me so much.”

Even her choice of coffee provider, Red Bay Coffee, is an intentional decision. Reem knows the Red Bay Coffee team from her organizing days. She feels passionate to work with “businesses that come from the community, for the community, that are connected with other people on the ground.”

“The definition of gentrification is people coming in and usurping a place, instead of offering an exchange,” says Reems. “I would love to live in a world in which there are no barriers or boundaries and that the concept of home is where you create it, and everyone is welcomed and [it is] inclusive. Unfortunately, we don’t live in that world today, and what I am trying to do at Reem’s, is say, ‘you can have Both/And’. You can have development without displacement. That is our motto. We need progress. We need our neighborhoods to be beautified but we need to do them in a way that actually speaks to the needs of the community.” 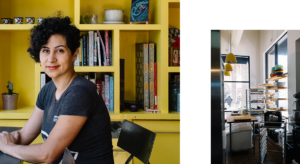 One way Reem is cultivating and creating exchange is by hosting ongoing Monday pop-up dinner events. These events bring in chefs and organizations within the community to utilize the space to spotlight food and culture from their own experiences. These take place on the one weekday the restaurant would otherwise be closed.

On a recent Monday night, the bakery welcomed a pop-up “Bóng Lên Queer Up Dinner.” This was an event organized by QTViêt Cafe Collectiv, celebrating Queer and Trans Viêt narratives through ancestral foodways, arts, and intergenerational dialogue. Later in the month, Reem’s hosted a “Story Slam” led by Jewish Voices for Peace Bay Area that invited the community to share their personal stories of “confronting Zionism” while enjoying Reem’s cuisine.

“I do consciousness-raising work. I want people to really understand, what the world would look like if we broke down barriers. If we saw each other, if we were all liberated people.”

Reem beams when she thinks of the times cross-sections of political groups have met in her space. “It’s a movement space. People come here to meet and plot the revolution,” she says.

For the Reem’s brand, it all comes down to being an active part of the community, with a point of view. ”When you think about Reem’s, you think about social justice, Arab pride, about bread, and our hospitality,” she says.

For Reem herself, she continues to build a legacy of social justice, political education and community activism. “I do consciousness-raising work. I want people to really understand, what the world would look like if we broke down barriers, if we saw each other, if we were all liberated people…how can we do that through celebrating the cultural aspect all of us bring? We all have culture. Every one of us has [culture], food is an essential part of that culture, and space,” says Reem.

Reem Assil is the owner of Reem’s California, located at 3301 E. 12th Street in the Fruitvale Village. The bakery is open Tuesday through Sunday, with special pop-up events held on Monday evenings. reemscalifornia.com / IG: @reem.assil @reemscalifornia