“As a Black girl growing up in East Oakland, you have to fight for your freedom.”

From the moment the words leave RyanNicole’s mouth, I immediately know three things. She means what she says when she says it. She has an indomitable sense of purpose. And she’s definitely from The Town.

It shouldn’t really come as a surprise, considering she’s a veteran rapper whose words have detailed the struggles and joys of her multi-hyphenate identity: “I’m an artist. I’m an actress and an activist. I’m an athlete. I’m a mom and a wife. Sister. Daughter. Woman. Black woman.”

Crystalline came to mind when she drew this image of herself.

She traces the edges and reflections of her personhood. They’re all true to her. But by themselves, they could never speak to the greater sum of her being. This sets the tone for our conversation and behooves me to scrap most of my (admittedly basic) questions. I quickly realize I don’t want to talk to this woman about her next project or the weather. I want to really peer into her world.

So we start on 73rd and Holly.

“That’s where I was born. I spent the first four years of my life there. That was around the [time of the] crack era. So my parents had to hightail it out of there. They bought a house in the Grass Valley area [and] spent like a year there. [But] Castlemount [High School] there was a no go. So we moved like two blocks up to Surrey Lane, which is just below Skyline [Boulevard]. And they’ve been there for 34-35 years. Something like that.”

She pauses, reflecting on her own childhood and this story that’s all-too-familiar to many Black families in America. 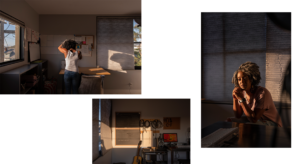 “East Oakland. I mean, living there, we always talked about being ‘house poor’ because my parents wanted to make sure I was in a good school district. We didn’t have a nice car; we didn’t have a car most of the time. We barely had our lights on, you know what I’m saying? I’m not saying that we were poor by any stretch of the imagination. But my parents really prioritized our education.”

They also prioritized getting up and out into the world. Since she could remember, the soon-to-be All-American hurdler spent much of her time running trails in The Bay. They are some of her fondest memories, along with those of her father playing music throughout the house. Just speaking about those two threads produces a warmth in her presence that confirms that these aren’t just recollections; they’re moments that have rooted her, within her truest self, for a long time.

The topic of music also sparks questions about hip-hop and her place in it. As a rapper, she’s graced TEDx stages and battle cyphers alike. But her most recent appearance was in an emcee capacity as one of Heiro Day’s hosts this summer. In the course of talking about it, Ryan is very honest and forthcoming about how she dialogued with the event’s organizers to address the gender disparity over the years, and how having several women hosting this year was a welcome step in a larger direction.

“I was happy to see a lot of the women that were there and be able to kind of squire them throughout the day. And, you know, at the end of it all I felt like, well, we all start somewhere. I appreciate the fact that the organizers heard my lament, and moved forward with trying to balance out the representation. And they’ve done a good job of it since. So I guess that’s kind of like, it was one of these spaces where I wasn’t represented. And so, it was good to be there and represent. And it seems that it gave them permission to continue to open up that door for more women.”

This clearly illustrates Ryan’s love-hate relationship with Oakland’s “all we ask is trust” code of conduct at times. It’s what makes The Bay so powerful as a culture and united front, but it can also hinder some beneficial growing pains when the proverbial family is behind closed doors. Ryan wants so much more for her hometown.

“I see Oakland as the gauntlet, where artists cut their teeth and get cut. And they can take [their art] out and, and be viable anywhere else. But also, Oakland looks like, for me, there’s an industry here that doesn’t require me to leave in order to have validity as a world renowned artist.”

As she tells me this, there’s a sorrow in her words. As though the hunger for her hometown to have an ecosystem that attracts, breeds, and sustains talent simultaneously fuels and exhausts her.

“You know, I think fighting is my default, right? Like, the fighting for peace [idea] is so stupid, but it’s my default. And so I’m really trying to recalibrate and redefine what it is to just exist and let that peace find me.”

The conversation veers from finding peace to dealing with fear. We ultimately land on faith. For Ryan, God is an ever-present, benevolent energy that’s constantly guiding but never overt.

“I’m really trying to recalibrate and redefine what it is to just exist and let that peace find me. Even if it’s in the middle of chaos. And I really think that’s God’s work. That’s not for me to toil [through]. And [so] sitting still, and letting that peace find me is the work that I’m doing right now.” 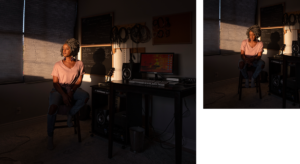 Despite this, she does harbor a healthy fear of life’s troubles, because what human doesn’t? So as we begin to wrap up, I try to simplify the conversation with a direct question: what does Ryan’s personal liberation look like right now, and in the near future?

It looks like me believing that newcomers have a vested interest in contributing to this culture and not shifting it to fit the mundanity of what they know. It looks like me being a full, 100% artist and traveling, but always having [Oakland] as my home base.”

It’s not world peace, and it shouldn’t be. For Ryan, a brilliant Black woman working to build a better life for herself and her people, tangible liberation is a quantum space of a crystalline nature. You see, the beauty of a crystal is that it reflects and refracts, while retaining its innate structure. It’s not the crystal’s responsibility to explain to you what it is—it simply is, at all times. You can shift your perspective and get a different image, but that doesn’t negate the fact that it exists truly, in all forms, regardless of the beholder. Ryan then, and her many identities, pushes beyond simple binaries, including the poetry of Lauryn Hill’s ‘hard rock’ and ‘gem’ dichotomy. As my partner’s constant refrain goes: “both can be true.” In RyanNicole’s case, it’s fair to say “all can be true.” And more.

1 thought on “The Misclassification of Ryan Nicole”