“I feel blessed to just be able to do stuff for my city, man. To give back to this beautiful place that has shared so much beautiful magic with me.”

If you’ve ever been down in the heart of San Francisco’s Mission district, you’ve seen Mel Water’s work. On 19th and Mission Street on the side of a local shop, is a stark, black and white mural of one of the neighborhood’s legends: Carlos Santana. He’s pensive in the image, hands clasped in front of his face as he looks past passersby. He’s surrounded and propped up by stylized Aztec figureheads and emblems, provided by fellow San Francisco muralist HYDE. Above, a singular message is emblazoned in the Old English/Caslon Black typeface: Para La Mission.

The statement is declarative in many senses. The immediate one being that Santana himself — all his works and contributions to the musical world — are a way of putting the majority Latinx neighborhood on the map. Simultaneously, the mural as an art piece is a living gift to the people — a marker of who has come out of its vibrant community and who has yet to come.

For some, the grandiose nature of the mural might make it seem like the work of an outsider looking to make a name for themselves in a city they know nothing about. Of course, we know what they say about assumptions. Consider those doubly true when it concerns assuming things about Mel.

“Don’t get me wrong, I love every neighborhood in the city. But The Mission hits home because — as a youth — my grandmother lived on top of the hill, in Daly City. So you know, traveling on the 14 Mission bus was normal, you know. Going grocery shopping at Mission Market or whatnot. So the influence of the whole neighborhood brought me back to my youth. So I was like, ‘Wow, now I can give back and have my own mural, in a prominent spot.’”

For Mel, his contributions to muralism is a legacy that began with the art he saw around him as a youth.

“I had the best of both worlds. I love graffiti because of my brother and my uncle and my cousin. We’re offspring of the 1980s breakdancer movement and 90s hip hop and graffiti. So I’ve seen my brother writing graffiti. I’ve seen my uncle dabbling with graffiti. I’ve seen my cousin being engulfed in graffiti with guys that I admire. On the flip side, from the traditional murals, was the 90s graffiti. And it was just like, dudes were doing street art back then, like illegally. You know, it was free art, man. It was like nobody was getting commission, people were just getting it up and expressing themselves in a Golden Era. Which is what we call it, the Golden Era of San Francisco.”

Twist. Spy. DREAM. Dug One from TMF. Mel lists these names and more with a spectator’s wonder and a peer’s reverence. As one should: the godfathers of SF’s graffiti movement paved the way for public art—from the streets, not the galleries and the white towers—to finally live outside the shadow of criminality. That tension between worlds was equally true to Mel’s own beginnings in the game, which may have, allegedly, started with a can of Krylon Regal Blue from a certain Kmart in Colma.

Come ups aside, Mel isn’t just limited to walls. In late 2017, he opened up Moonrise Studios, a tattoo shop a couple doors down from Guerra’s Quality Meats. Right on the border between San Francisco’s ever-foggy West Portal and Outer Sunset neighborhoods, the shop is part gallery, part workshop, allowing Mel to work with living canvases whilst having a short commute. In fact, the day I walk in to interview him, he’s still working on a minimalist thigh piece that’s as refined as it is expressive.

Yet, despite his steady hand and clear skill, Mel still has the anxieties of an artist. He’s not just concerned about what he’s creating, but who he’s doing it for.

“The first drop of ink in the skin. You know, the first line. That’s it. Paint on the wall, you could paint over a line you don’t like, but tattooing is less forgiving. So you pour your heart into it.” One would hope every tattoo artist is as thoughtful as Mel is, but when he says it, you get the feeling very few people genuinely mean it like he does.

It’s an empathetic streak that feels right in line with his laid-back, unfazeable California mystique: the easy smile, the immediate familiarity with things foreign and niche, the multitude of tattoos, the meditative flow of conversation; and yes, even the Carhartt tee. Mel isn’t a stereotype, he’s the real deal that all the supposed cool kids have been emulating with terrible success for the past 5-10 years. Of course, this is just how San Francisco – and The Bay – made him. 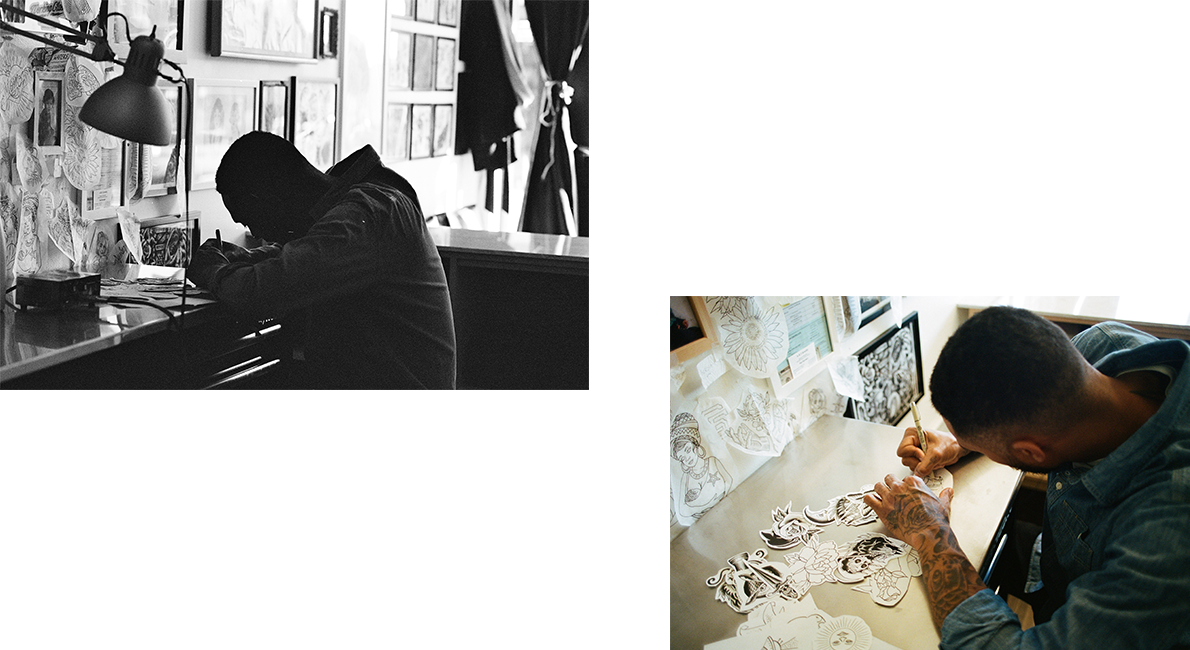 “I’m from here, so luckily, you’re blessed to be around a lot of different kinds of people and food. And that’s the cool part about being able to relate like, yeah, ‘I’ve had that’ or ‘I’ve tried that.’ You know, it’s funny, I have friends that are Russian, Chinese, Filipino and it’s just like, ‘Wow, it’s deeply mixed.’ To have that diverse of a friend group. So I think with that kind of environment your confidence of being around different things, you have this flexibility. And this gift to just kind of roll with the unknown.”

Being mixed himself — descended from a Black father and Filipino mother — Mel fits right into this narrative. The Bay has a long history of different communities finding common ground over food, music, movies, labor and more. And if anything, Mel’s very existence and his tenacity to hold — and record — some piece of San Francisco’s best parts, is a testament to what so many regret about seeing the city become homogenized through ballots, bullets and buildings.

As The City by The Bay becomes blander, these deeply mixed communities stop exchanging; people become distrustful, and those who need space most — the oppressed, the endangered, the elderly, and the artists—get pushed out. Mel, being who he is, is acutely aware of this.

All else equal? We’re just as lucky to have him here, too.

Editor’s note: This interview was conducted in early 2020, pre-pandemic.